Bishop Jack Wisor /Just For Jesus In The News 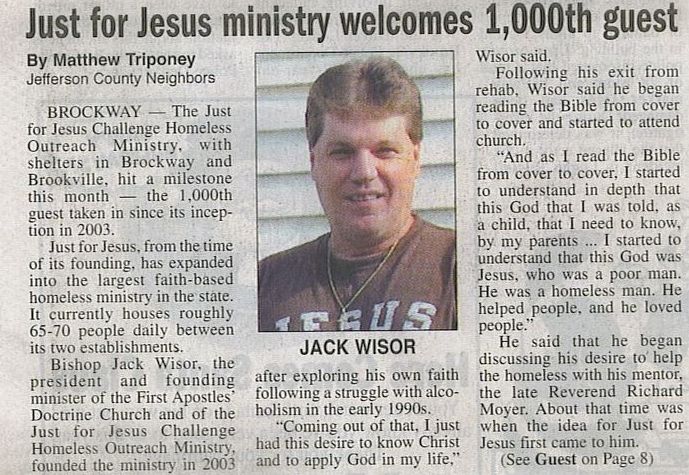 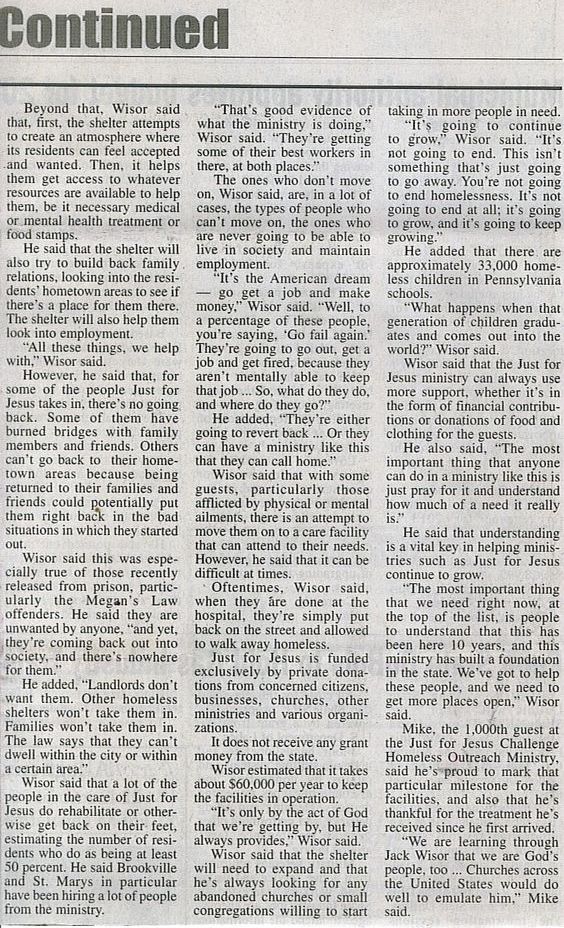 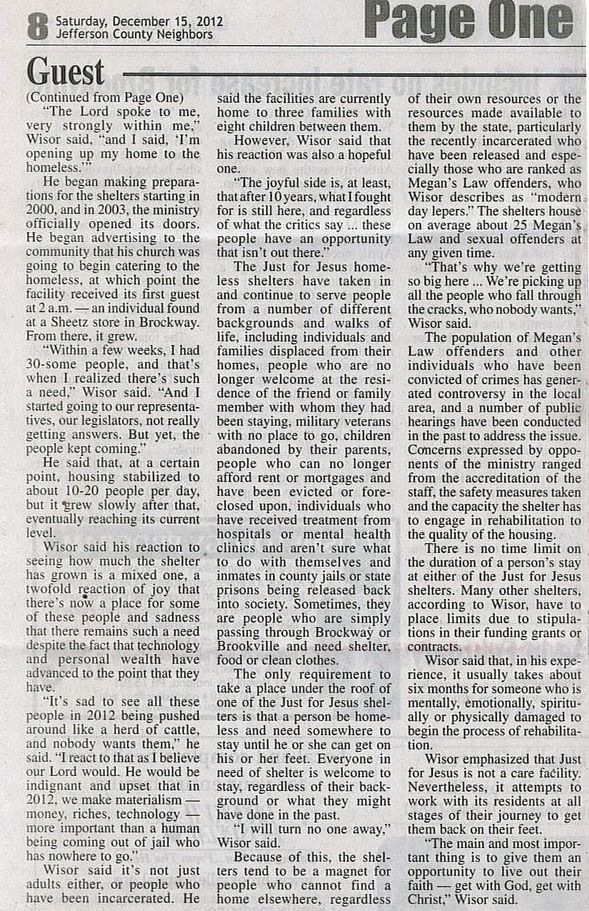 Just for Jesus guests no longer listed as ‘transient’ offenders

A few aspects of the law, signed Dec. 20, took effect Feb. 18.
One of the changes that took effect deals with homeless offenders, and is a change about which the Rev. Jack Wisor, director of the Just for Jesus Homeless Ministry in Brockway, recently voiced concerns.

The new transient requirement says that an offender who does not have a permanent address must register with the state police every 30 days.

As part of this, Megan Law offenders housed at the Just for Jesus ministry were notified in February that they would no longer be treated as residents of the ministry, because the new law required that all offenders living in homeless shelters must register as transients, and not as individuals with permanent addresses.

"This concerned me," Wisor said. "I was concerned about the safety of the community."

Because of his concern, Wisor contacted the Pennsylvania State Police and Corbett's office.

He reported his homeless shelter should not apply in this instance because his residents stay at the ministry for more than 30 days, which is unlike many other shelters across the state; therefore, he said Megan's Law offenders at Just for Jesus should be listed on the Megan's Law Web site with permanent addresses.

"There were people who were voicing their concerns, saying they were going to try to contact Sen. (Joe) Scarnati," Wisor said. "But I already realized what needed to be done and stepped in and took care of the situation."

Wisor recently received notification from the Megan Law Division of the Pennsylvania State Police in Harrisburg that offenders housed at the Just for Jesus ministry are no longer listed as "transient."

Furthermore, the state police and Governor’s Office have determined that anyone who chooses to become a guest at Just for Jesus may be treated as a resident with a permanent address, and as such, does not need to register monthly.

"This is a concern across the state," Wisor said. "It would be very hard to keep track of where they are, what they are doing if (they are) listed as transient. As long as they are connected with the ministry and Just for Jesus, they will be on the Megan's Law site, and the community will know."

According to Pennsylvania State Police Press Secretary Maria Finn, not every homeless shelter operates under the same premise and the rules as the Just for Jesus ministry.

Most shelters provide housing on a temporary basis.

Some provide housing for only two to three days; therefore, the state police is going to look at every situation as unique, and also bring it before legal counsel.

"(Wisor) applied common sense and logic and rendered a decision," State Police Captain Doug Grimes said. "He brought it to our attention that his situation was unique."

According to Grimes, any sex offender who changes residence must notify the state police in a 48-hour time frame.

To Wisor, this requirement is not stringent enough, and would like to see a change here as well.

"Once an offender leaves a residence, he should have to immediately notify police," Wisor said. "An offender could do a lot in 48 hours, and I think this is something communities need to petition to be changed."
Wisor said he is pleased the state police agreed with his analysis; however, he hopes to continue to work to make his community as safe as possible.

"It's important we all work together," Wisor said. "We all need to work together for a solution and not fight back and forth, and not make more problems."

According to the Pennsylvania Megan's Law Web site, there are 65 registered sex offenders in Jefferson County.

More information about sex offender registration requirements and the registry itself can be found online at http://www.pameganslaw.state.pa.us.

"These individuals are not going to just go away," Wisor said. "They're not just going to disappear. So it's important we are aware of where they are and make sure they are not being hidden in the darkness of the community."

© 2010-2016 Bishop Jack Wisor. All rights reserved under Pa. C.S. Title 13 §1207. No part of this document may be reproduced in any form or by any electronic or mechanical means, including information storage and retrieval systems, without permission in writing from Bishop Jack Wisor.